Time to update you on my IDC course. The feedback on my five braids … 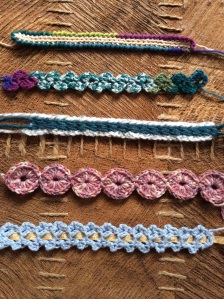 …. was slightly disappointing as the two shorter ones lost marks for lack of length and my mentor did not really like my use of self-striping sock yarn on samples which cannot show off the full range of colours. I hadn’t thought of that but can see that these yarns need to be shown off in an item which does justice to the colour mix.

So, having reworked the two offending braids I decided to have a go at Tunisian crochet, also known as Afghan crochet, which was completely new to me. Initially, I found working with the metal Tunisian hook (a timely freebie from Simply Crochet magazine) a bit hard on the fingers as was mastering the best way to hold this long implement.

Things got easier when I realised that it was possible to get hold of a Knitpro Symphonie rosewood hook and attach it to the knitting cables which I already have. 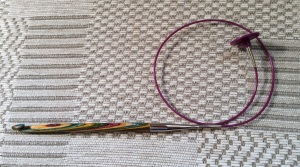 much easier to hold and manoeuvre

The technique is something between knitting and crochet – it involves picking up loops across a row of stitches and holding the loops produced on the hook. This is called the forward pass. Then the stitches are completed and the loops dropped on the way back which is called the return pass. Sounds much more complicated than it is!  The fabric produced has a woven, dense texture and because it needs to be worked on a larger hook than one would normally use for the chosen yarn it grows quite quickly.

Very fortuitously, I got onto a Tunisian Crochet workshop at Miju Wools, Gloucester, which gave me some more practice before doing my samples.  This sampler in DK 100% Merino wool gives an idea of the fabric …. 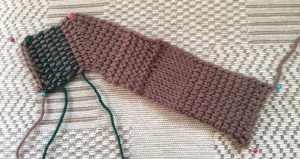 Part I of The International Diploma in Crochet requires three samples of Tunisian crochet: one in Tunisian simple stitch …. apparently this was popular among Victorian ladies who then embellished the resulting squared fabric with cross stitch embroidery … 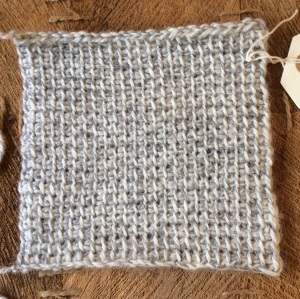 …. this biggest issue for me on this one was achieving a straight left hand edge and I don’t think I’ll be starting on cross stitch any time soon! 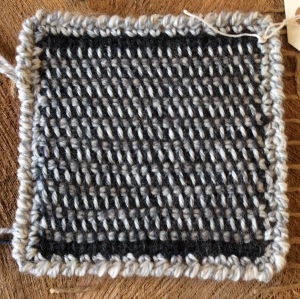 definitely tweedy and a rather dense texture

This square has also been edged with a round of dcs and crab stitch which, in fact, hides the uneven tension at the side – think I should have used a larger hook for these samples.

The third example has to be of a textured Tunisian stitch and again the hardest part for me was achieving an even tension. I finally decided on a bobble stitch as described in Pauline Turner’s booklet on Tunisian crochet and although I have submitted it – hence no photo at the moment – I’m less than hopeful that it will pass.

So, I await the verdict on this fourth submission – hope to get it soon in order to keep up the momentum before summer activities such as gardening cut down my crochet time. The frosts of last week already seem long gone as we plan our first barbecue of the year.

Enjoy the sunshine and keep crocheting,

Following my last blog on Kaffe Fassett I have been totally spoiled – two days last week were spent in Cambridge with a friend who has always shared my passions for colour, yarns and blue and white china. In fact, she has always been an inspiration to me when it comes to crafting and collecting and we have shared our love of these for forty plus years.

During the seventies and eighties we used to scour every woolshop in every town we visited for oddments of beautiful yarns – natural fibres in the scrummy colours which KF used – to stash in colour-coded drawers! Bric-a-brac shops beckoned to us, promising blue and white china treasures – in those days you could pick up an interesting jug or plate for a few pounds if you were lucky.

All these memories were revived last week and my visit to The Sheep Shop in Cambridge was a real treat ….. scrummy, squishy yarns in a rainbow of fantastic colours, all so needing to be touched. Members of the knitting group were busy working on varied exciting projects – just how you imagine an inspiring woolshop to be.  The owner even wanted to take my photo – now that is a first! 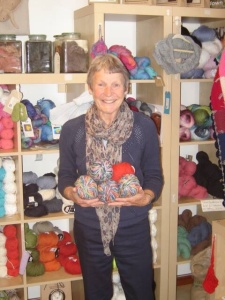 spot the odd ball out?

Now, red is not usually one of my colours but I found a lovely lambswool-cotton blend …. 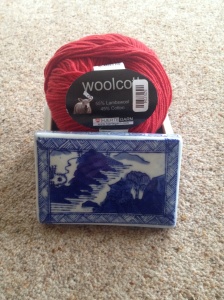 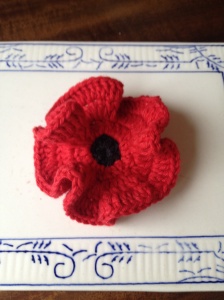 ………………………………   perfect for the Remembrance poppies which I wanted to make before going to the poppy workshop to be held in one of my local yarn stores. 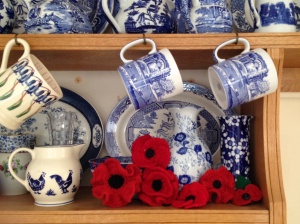 So Wednesday was spent at Miju Wools in Gloucester working up poppies from different patterns; some will be sold to the local community with proceeds going to The British Legion and some will be passed on to friends and family. 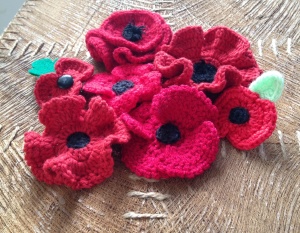 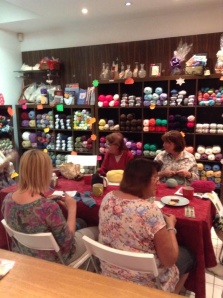 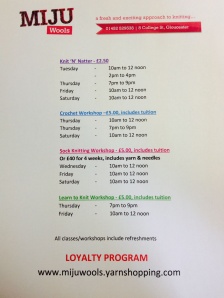 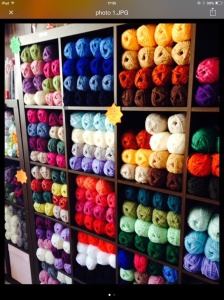 just look at the colours

– they also have some super gifts for craft lovers many of which are handmade by members of their knitting and crochet groups. There will be more workshops leading up to Christmas and regular classes are held on a weekly basis.

If you remember last time I wrote I was working on a cushion cover using the “magic ball” method. In fact, it has worked out well and the colours all blend together nicely. In the interests of symmetry I should really make another one to go the other end of the sofa …. but there are so many other projects queued that realistically I don’t think it will happen this side of Christmas!

So, Halloween projects here we come – there’s not much time left.

Enjoy your crafting too,

Hello again. It’s been a while since I last wrote …. all down to a combination of holidays, hot weather and other bits and bobs.

So, it’s good to be back – albeit in rather dramatic fashion. My first crochet session of the autumn just happened to coincide with my lovely daughter’s nomination for me to do the Ice Bucket Challenge. Instead of starting our Monday morning with the Magic Loop as I had planned my lovely ladies found themselves armed with iPhone, IPad, camera, towels and a bucket full of icy water.

Hot shower and hot coffee later we got down to the business in hand which was to introduce my group to the endless possibilities of working in the round, using the spiral, increasing and decreasing. The world is your oyster with circular crochet – amigurumis, bags, beanies, doilies, baubles, covers for pebbles to name but a few possible projects. I even found a delightful pattern for the cutest butterfly which I couldn’t resist trying. 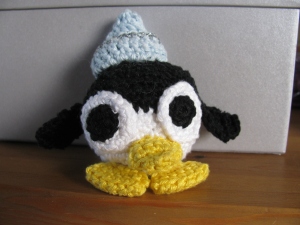 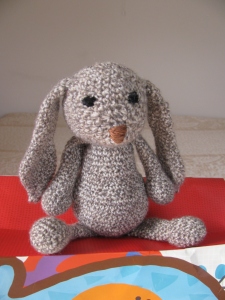 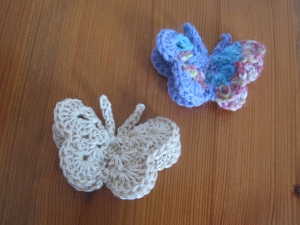 delighted to find a pattern for these little beauties

Really good news last week -one of our local yarn stores, Miju Wools in Gloucester, has just got a reprieve after being threatened with closure – It saddens me when wool shops cannot survive either because the running costs are so high or the customers just aren’t visiting. It is so easy to take these shops for granted and just top up our stashes with online purchases. I simply can’t believe it when people say that nobody knits or crochets anymore but it is definitely true that those of us who do must support local businesses whenever we can.

If you live in the Gloucester area take a look at Miju Wools on Facebook – there’s lots going on there at present and plenty of different daytime and evening classes.

just look at the colours

Well, that’s my little bit of support for small businesses done. I’m off to deliver a couple of the Woolly Prawn kits to the shop today along with a few crochet covered stones.

Keep spreading the knitting and crochet love wherever possible.